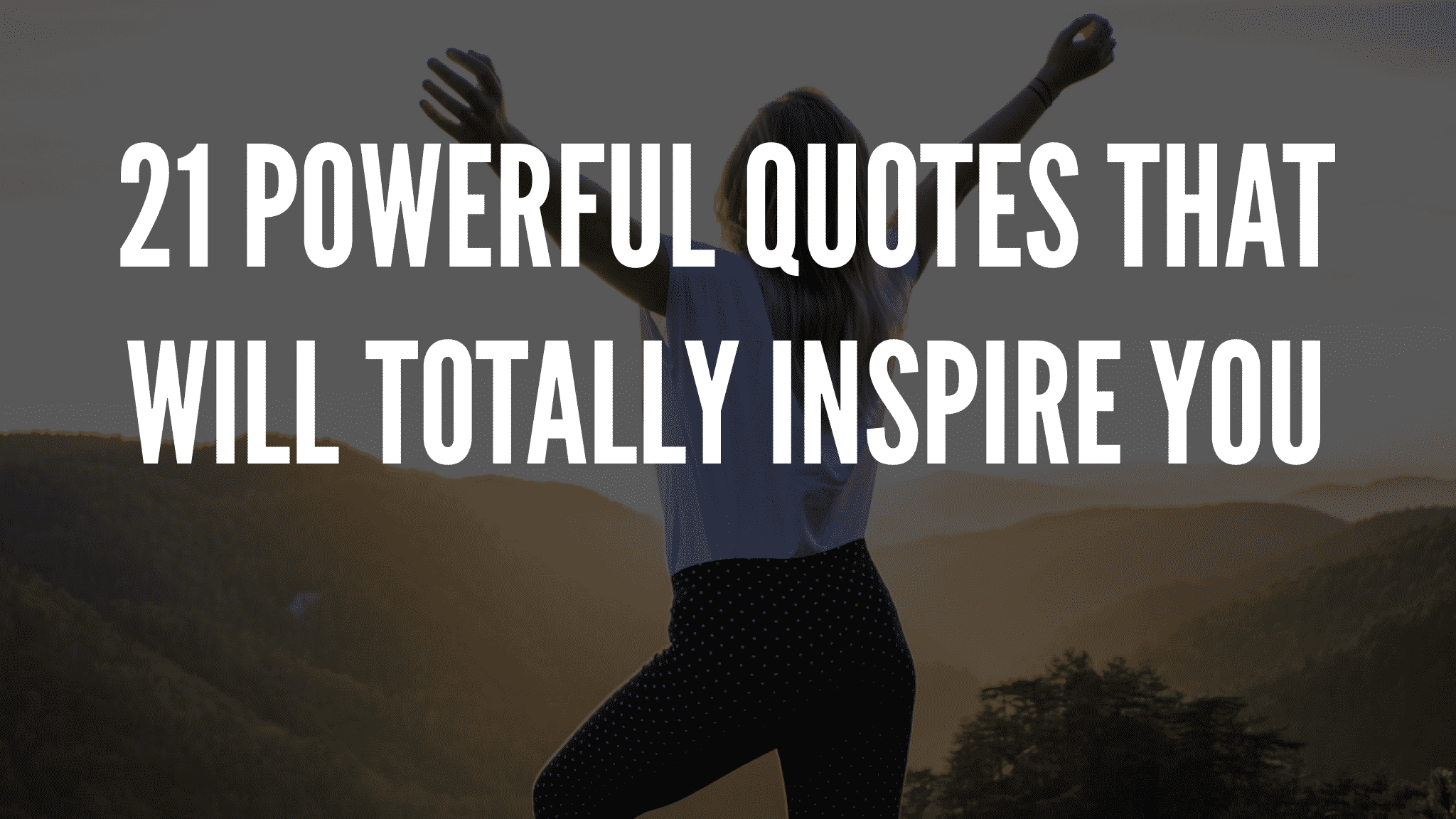 I wanted to put together a collection of quotes that would take just a few minutes to read but their message would be powerful. I hope that the following quotes will inspire you to believe in yourself and to take action to achieve your goals.

Please take a few minutes out of your day today and read these wonderful quotes. I am sure that there will be one or two quotes at least that will resonate with you.

Why not try to get into the daily habit of listening to something positive, reading something inspirational and doing something that will improve you.

1. Sometimes the bravest and most important thing you can do is just show up. – Brené Brown

2. Dream big. Start small. But most of all, start. ― Simon Sinek

3. Anything is possible when you have a path, a plan, and a desire to take action. – Dean Graziosi

4. There is nothing stopping you from succeeding but you. ― Eric Worre

5. In order to get what you want, you must act. – Wallace D. Wattles

6. The hardest lessons to learn is that you’re more capable than you think you are. ― Barbara Corcoran

8. If you want the most reward you have to take the most risk. ― Jesse Itzler

9. In all realms of life it takes courage to stretch your limits, express your power, and fulfill your potential. ― Suze Orman

10. One of the best things you can do to improve the world is to improve yourself. ― Jen Sincero

11. The best people to surround yourself with are the people that bring out the best in you. – Jay Shetty

12. Magic is believing in yourself, if you can do that, you can make anything happen. ― Johann Wolfgang von Goethe

13. If you see it in your mind, you’re going to hold it in your hand. ― Rhonda Byrne

14. I hope you realize that every day is a fresh start for you. That every sunrise is a new chapter in your life waiting to be written. — Juansen Dizon

15. The right decisions are always the hardest to make it. But they must be made in order to live the life you deserve. – Trent Shelton

17. The whole secret of a successful life is to find out what is one’s destiny to do, and then do it. ― Henry Ford

18. Study the habits of the people you want to be like and then imitate them. If they are succeeding, they must be doing something right. ― Dave Ramsey

20. Take time to take inventory of your life. Look in the mirror and hold yourself accountable. – David Goggins

21. Make yourself a priority. No one should treat you better than you treat yourself. Love starts with you.― Tony Gaskins

Lisa has inspired people from all over the world to accomplish unfathomable goals and tap their limitless potential. Lisa has appeared on Oprah, The Today Show, The Dr. Phil Show, The Steve Harvey Show. Lisa took part in the movie ‘The Secret’ and is also featured in book ‘The Secret’ written by Rhonda Byrne.

I hope that you enjoy this wonderful collection of Lisa Nichols Quotes and that they inspire you to follow your dreams.

1. You are the designer of your destiny; you are the author of your story. – Lisa Nichols

2. While you’re walking on your journey, some days you’re going to have to take that walk alone. – Lisa Nichols

3. It doesn’t matter how the goal will be achieved, but you must maintain the conviction that achieving it is necessary and not open to compromise. – Lisa Nichols

4. Mostly, the world sees you the way you see yourself. – Lisa Nichols

5. The truth is that no matter where you started out in life, you have a choice between scarcity and abundance. – Lisa Nichols

6. Trust yourself. Know that all things are working together to support you living your best life. – Lisa Nichols

7. In the pursuit of not falling, you’ll never fly. – Lisa Nichols

10. People are more comfortable with a familiar discomfort than they are with an unfamiliar new possibility. – Lisa Nichols

11. Recognize that each choice you made up until now has either given you a great outcome or a great lesson. Both are valuable. In fact, both are necessary. – Lisa Nichols

12. Change your thoughts to change your life. – Lisa Nichols

13. Do something, anything that lets you tap into your calling, even if it’s only a baby step. – Lisa Nichols

14. When your clarity meets your conviction and you apply action to the equation, your world will begin to transform before your eyes. – Lisa Nichols

15. Comparison is and will always be the thief of all joy. – Lisa Nichols

17. We can change the way our next chapter will be written because we are still holding the pen in our hands. – Lisa Nichols

18. So often we take care of everybody and the whole time we’re putting ourselves on the back burner. This is the season for you to ‘do you’ first. – Lisa Nichols

19. Desire, thought, and action all have to be present for transformation to occur. – Lisa Nichols 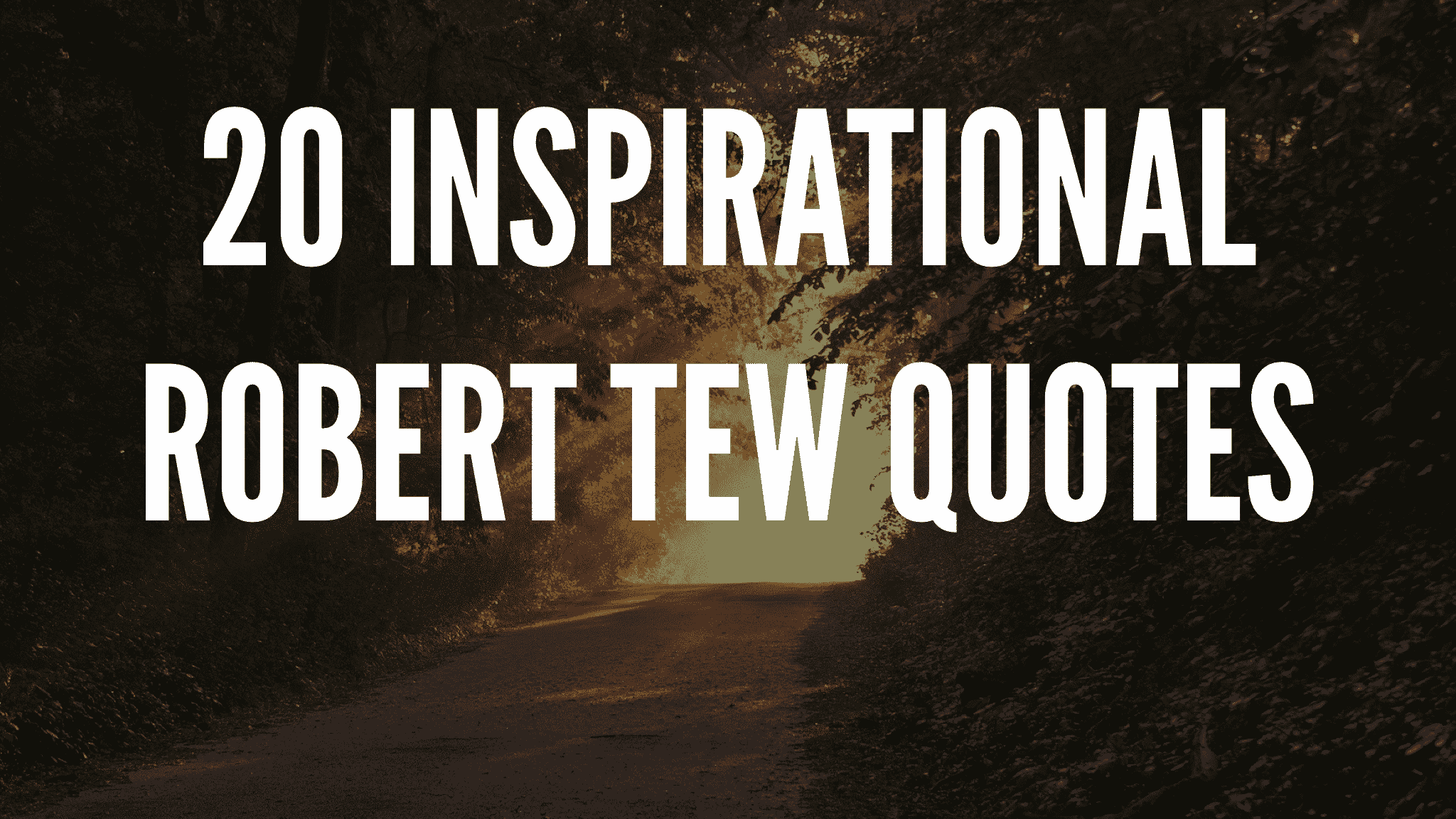 I hope that you will enjoy this great collection of inspirational Robert Tew Quotes.

1. Sometimes what you’re most afraid of doing is the very thing that will set you free. – Robert Tew

2. Don’t let negative and toxic people rent space in your head. Raise the rent and kick them out! – Robert Tew

3. Don’t expect to see positive changes in your life if you surround yourself with negative people. – Robert Tew

5. Everything you go through, grows you. – Robert Tew

6. Challenge yourself everyday to do better and be better. Remember, growth starts with a decision to move beyond your present circumstances. – Robert Tew

7. Don’t ask why people keep hurting you. Ask yourself why are you allowing it to happen. – Robert Tew

9. Just because you’ve made mistakes doesn’t mean your mistakes get to make you. Take notice of your inner critic, forgive yourself, and move on. – Robert Tew

10. The struggle you’re in today is developing the strength you need for tomorrow. Don´t give up. – Robert Tew

11. You can never be happy if you’re trapped in the past and fearful of the future. Living in the present is the only way to be happy. – Robert Tew

12. The longer you live in the past, the less future you have to enjoy. – Robert Tew

13. Be with people who like you for who you are, not what you have. – Robert Tew

14. Sometimes you need to be alone in order to reflect on life. Take time out to take care of yourself. You deserve it. – Robert Tew

15. Respect yourself enough to walk away from anything that no longer serves you, grows you, or makes you happy. – Robert Tew

16. Sometimes you need to take a break from everyone and spend time alone, to experience, appreciate and love yourself. – Robert Tew

17. Success isn’t what others can see, but how you feel. It’s living your truth and doing what makes you truly happy. That’s success. – Robert Tew

18. It takes a lot of courage to push through hard times. Never give up. Good things are coming your way. – Robert Tew

19. Trust yourself. You’ve survived a lot, and you’ll survive whatever is coming. – Robert Tew

20. To be happy, you must let go of all the negative beliefs, emotions and people that are holding you back in life. – Robert Tew 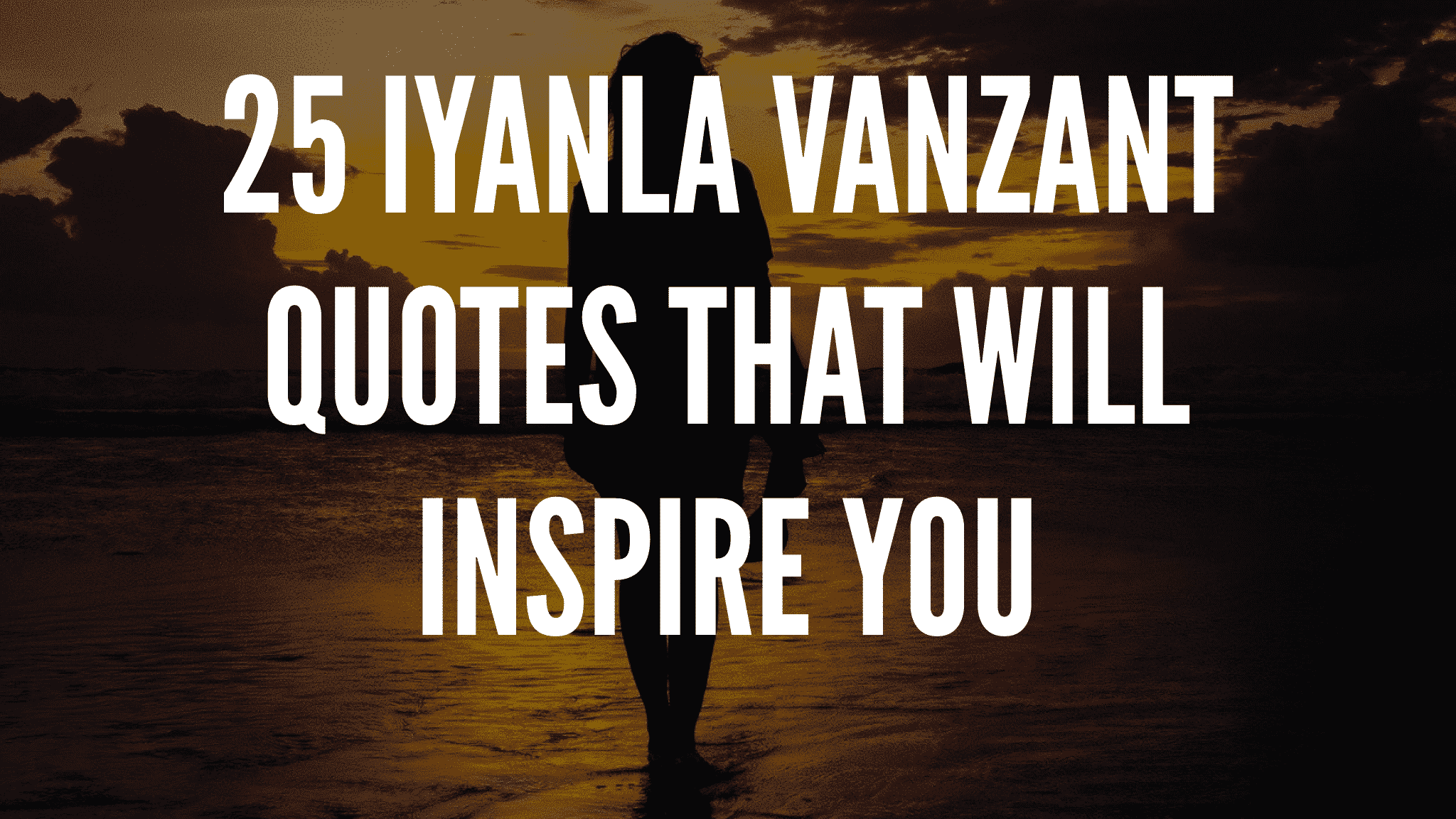 Iyanla went from being a mother of three on welfare to achieve a law degree, write 15 books (six New York Times best-sellers), become a regular guest on Oprah, win an Emmy award and host her own talk show.

I hope that the following powerful collection of Iyanla Vanzant quotes will both inspire and empower you.

1. So many of us invest a fortune making ourselves look good to the world, yet inside we are falling apart. It’s time to invest on the inside. – Iyanla Vanzant

2. Your willingness to look at your darkness is what empowers you to change. – Iyanla Vanzant 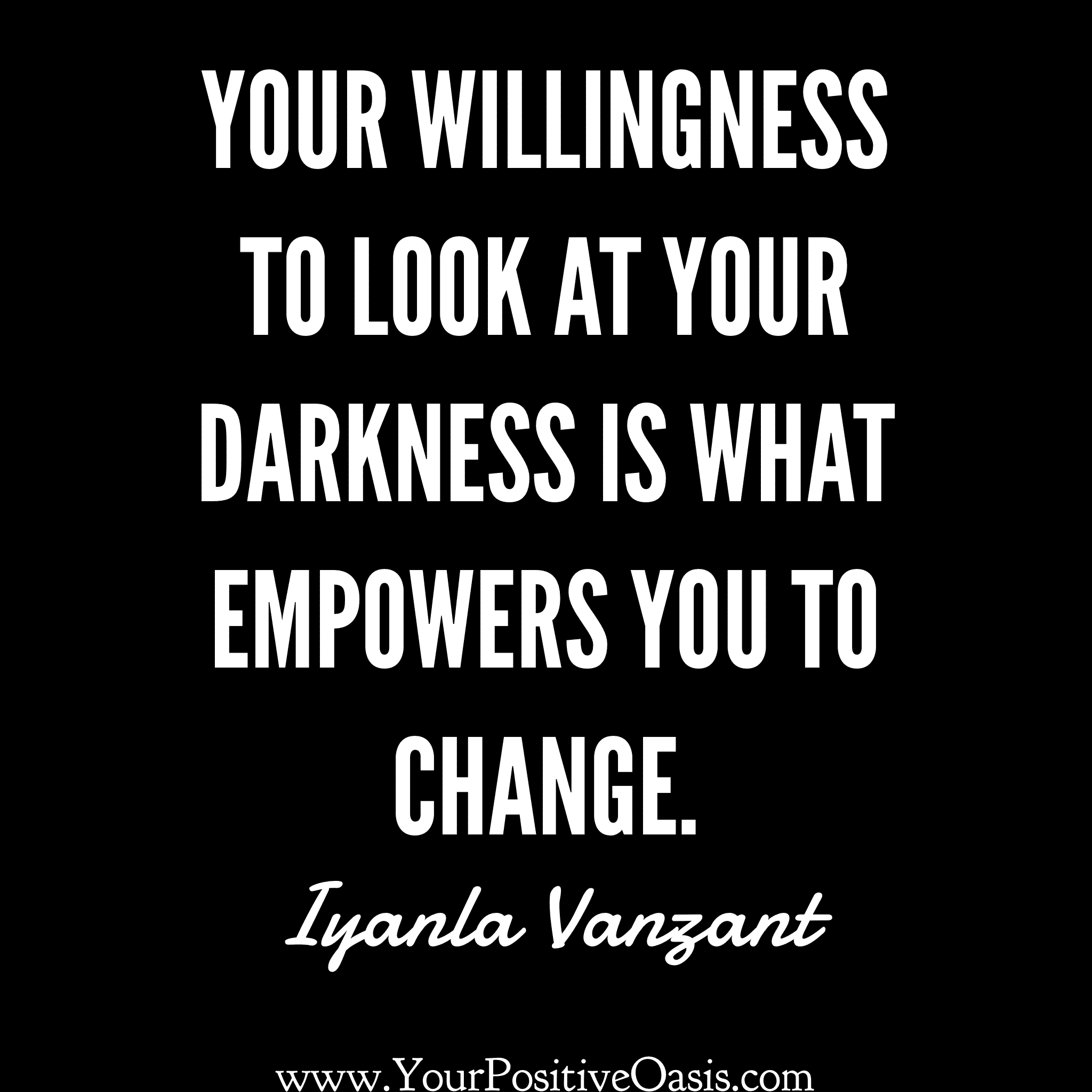 3. Right where you are is where you need to be. Don’t fight it! – Iyanla Vanzant

4. The strength you need, the answer you want, the solution you seek is around you. Turn to the infinite power within yourself. – Iyanla Vanzant

5. There is absolutely no reason to ever settle for less than the best. – Iyanla Vanzant

6. Rather than beating yourself up for what you are not doing, appreciate and celebrate the things you are doing. – Iyanla Vanzant

7. Have the courage to be exactly who you are without apology. – Iyanla Vanzant

8. Instead of running from what you ‘don’t want’ walk with commitment toward what you desire. Focus on where you are going rather than being obsessed with where you have been. The difference between the two is energy. – Iyanla Vanzant

9. I now know that nothing in my life will change until I change the way I see my life and myself. – Iyanla Vanzant

10. We must inspire ourselves by believing we have the power to accomplish everything we set out to do. – Iyanla Vanzant

12. Loving yourself has nothing to do with being selfish. It means that you accept yourself for what you are. – Iyanla Vanzant

14. The only way to get what you really want is to let go of what you don’t want. – Iyanla Vanzant

15. If you don’t allow yourself to dream, to dare, to move up, out, forward; how will you ever know what you are really capable of? – Iyanla Vanzant

16. Move toward your wildest dreams, take the labels off your mind and step boldly into your greatness. – Iyanla Vanzant

17. No matter what’s going on in your life today, remember, it’s only preparation. It’s preparation for better things. – Iyanla Vanzant

18. You must create what you want inside of your heart and mind before you can hope to see it in your world. – Iyanla Vanzant

19. You have set standards for how you want to be treated and what you expect from yourself and for yourself. – Iyanla Vanzant

20. If we celebrate, support, and nurture ourselves, we will not need anyone else to do it for us. – Iyanla Vanzant

21. When you start a new trail equipped with courage, strength, and conviction, the only thing that can stop you is you. – Iyanla Vanzant

22. Just do what you do and do it well. Stop worrying about what other people are doing, or what they will say about what you are doing. – Iyanla Vanzant

23. Wherever you are, use your time, energy and talents to do the best you can right now. – Iyanla Vanzant 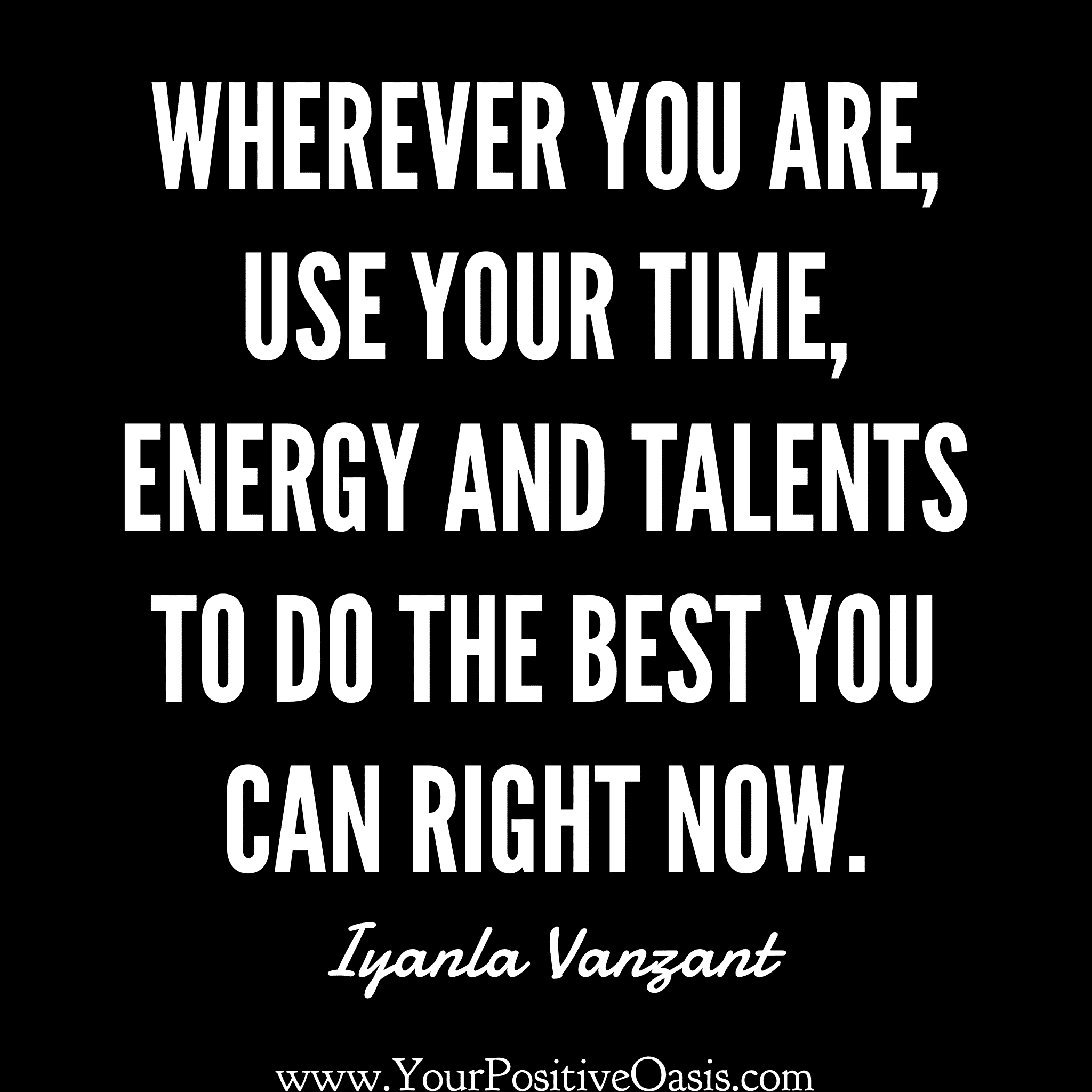 24. There comes a moment when you must decide that you are going to believe in yourself. If you believe you have the power, the power is yours. – Iyanla Vanzant

25. Let go and open your heart to the possibility that there is something great waiting for you. – Iyanla Vanzant