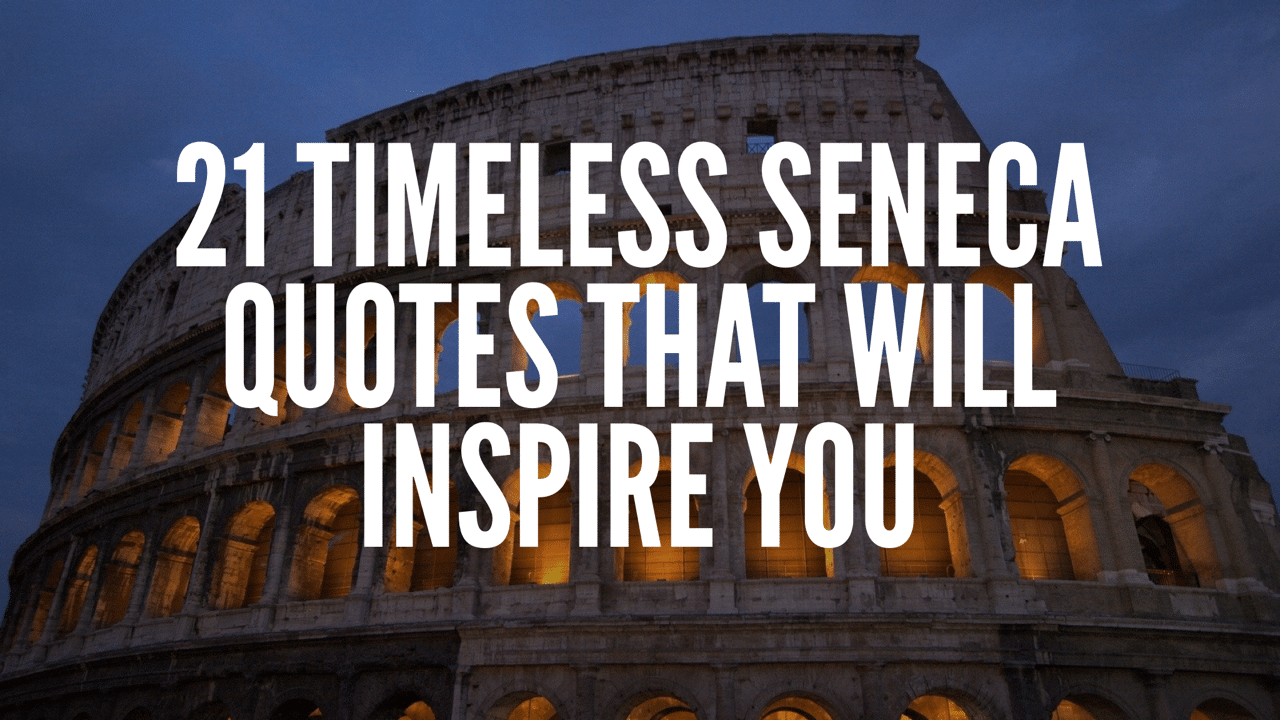 Lucius Annaeus Seneca, otherwise known as Seneca the Younger, or just Seneca was born in southern Spain and educated in Rome over 2,000 years ago. Seneca was a philosopher, statesman, writer and dramatist. Seneca was also the tutor of Emperor Nero, as well as his imperial advisor.


I hope that you will enjoy this great collection of Seneca quotes. These quotes contain timeless advice and wisdom that I am sure will inspire you.

1. We suffer more in imagination than in reality. ― Seneca

2. The greatest blessings of mankind are within us and within our reach. A wise man is content with his lot, whatever it may be, without wishing for what he has not. ― Seneca

3. Sometimes even to live is an act of courage. — Seneca

4. Every night before going to sleep, we must ask ourselves: what weakness did I overcome today? What virtue did I acquire? — Seneca

5. Begin at once to live, and count each separate day as a separate life. — Seneca

6. As long as you live, keep learning how to live. — Seneca

7. Throw me to the wolves and I will return leading the pack. — Seneca

8. If you really want to escape the things that harass you, what you’re needing is not to be in a different place but to be a different person. — Seneca

10. One of the most beautiful qualities of true friendship is to understand and to be understood. — Seneca

11. Difficulties strengthen the mind, as labor does the body. — Seneca

12. The bravest sight in the world is to see a great man struggling against adversity. — Seneca

13. Luck is what happens when preparation meets opportunity. — Seneca

14. We are always complaining that our days are few, and acting as though there would be no end of them. — Seneca

15. Wealth is the slave of the wise. The master of the fool. — Seneca

16. If one does not know to which port one is sailing, no wind is favorable. — Seneca

18. A gem cannot be polished without friction, nor a man perfected without trials. — Seneca

19. Hang on to your youthful enthusiasms, you’ll be able to use them better when you’re older. — Seneca

20. He is most powerful who has master over himself. — Seneca

25 Empowering Quotes About The Future And Moving Forward

I really hope that you enjoy this collection of positive quotes. We can all do with some inspiration from time to time to lift our spirits and help us to be more positive!  END_OF_DOCUMENT_TOKEN_TO_BE_REPLACED

I really hope that you will enjoy this wonderful collection of quotes by some of the greatest motivational speakers ever! The following speakers have motivated millions of people all over the world through their seminars, videos and books.
END_OF_DOCUMENT_TOKEN_TO_BE_REPLACED

Johann Wolfgang von Goethe, was a German poet, playwright, novelist, scientist, statesman and amateur artist. His works and opinions made a deep impression on many of the writers and poets of the early 19th century. END_OF_DOCUMENT_TOKEN_TO_BE_REPLACED