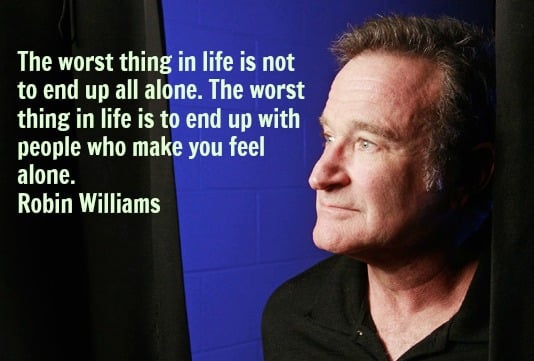 Many of us grew up first seeing the wonderful Robin Williams on our television screens as the crazy alien in Mork and Mindy, for years he has entertained us on the silver screen in such memorable movies as Good Morning Vietnam, Good Will Hunting, Mrs Doubtfire, Dead Poets Society and many more.

He made us laugh and cry, but most importantly he always entertained us. His movies and his humour will live on for generations. I wanted to put together this small collection of quotes from Robin Williams as a reminder that no matter what we are going through in life, there is always a reason to smile and have a sense of humour.

You’re only given a little spark of madness. You mustn’t lose it.

No matter what people tell you, words and ideas can change the world. (Movie: Dead Poets Society)

Like so many things, it is not what is outside, but what is inside that counts.

Please, don’t worry so much. Because in the end, none of us have very long on this Earth. Life is fleeting. (Movie: Jack)

Real loss is only possible when you love something more than you love yourself. (Movie: Good Will Hunting)

You know what music is? God’s little reminder that there’s something else besides us in this universe; harmonic connection between all living beings, everywhere, even the stars.

Death is nature’s way of saying, “Your table is ready.”

I stand upon my desk to remind myself that we must constantly look at things in a different way.

Make your life spectacular. I know I did.

Sometimes it’s more noble to tell a small lie than to deliver a painful truth.

For me, right now, the greatest thing is to take a moment and just breathe.

There is still a lot to learn, and there is always great stuff out there. Even mistakes can be wonderful.

30 Powerful Zen Sayings To Live By